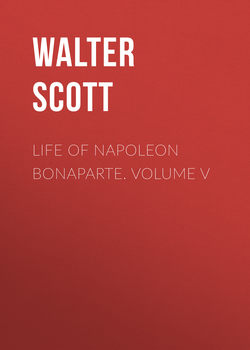 The decline of Napoleon's waning fortunes having been such, as to turn him aside from an offered field of battle, and to place him betwixt two armies, each superior in number to his own, called now for a speedy and decisive resolution.

The manœuvres of Schwartzenberg and Blucher tended evidently to form a junction; and when it is considered that Buonaparte had felt it necessary to retreat from the army of Silesia before Laon, and from the grand army before Arcis, it would have been frenzy to wait till they both closed upon him. Two courses, therefore, remained; – either to draw back within the closing circle which his enemies were about to form around him, and, retreating before them until he had collected his whole forces, make a stand under the walls of Paris, aided by whatever strength that capital possessed, and which his energies could have called out; or, on the contrary, to march eastward, and breaking through the same circle, to operate on the rear of the allies, and on their lines of communication. This last was a subject on which the Austrians had expressed such feverish anxiety, as would probably immediately induce them to give up all thoughts of advancing, and march back to the frontier. Such a result was the rather to be hoped, because the continued stay of the allies, and the passage and repassage of troops through an exhausted country, had worn out the patience of the hardy peasantry of Alsace and Franche Comté, whom the exactions and rapine, inseparable from the movements of a hostile soldiery, had now roused from the apathy with which they had at first witnessed the invasion of their territory. Before Lyons, Napoleon might reckon on being reinforced by the veteran army of Suchet, arrived from Catalonia; and he would be within reach of the numerous chain of fortresses, which had garrisons strong enough to form an army, if drawn together.

The proposed assault of the allies was to be general and simultaneous, along the whole line of defence. The Prince Royal of Wirtemberg was to attack the extreme right of the French, in the wood of Vincennes, drive them from the banks of the Marne and the village of Charenton, and thus turn the heights of Belleville. The Russian general, Rayefski, making a flank movement from the public road to Meaux, was to direct three strong columns, with their artillery and powerful reserves, in order to attack in front the important heights of Belleville and Romainville, and the villages which give name to them. The Russian and Prussian body-guards had charge to attack the centre of the enemy, posted upon the canal de l'Ourcq, the reserves of which occupied the eminence called Montmartre. The army of Silesia was to assail the left of the French line, so as to turn and carry the heights of Montmartre from the north-east. The third division of the allied army, and a strong body of cavalry, were kept in reserve. Before the attack commenced, two successive flags of truce were despatched to summon the city to capitulate. Both were refused admittance; so that the intention of the defenders of Paris appeared fixed to hazard an engagement.

It was about eight o'clock, when the Parisians, who had assembled in anxious crowds at the barriers of St. Denis and of Vincennes, the outlets from Paris, corresponding with the two extremities of the line, became sensible, from the dropping succession of musket shots, which sounded like the detached pattering of large drops of rain before a thunder-storm, that the work of destruction was already commenced. Presently platoons of musketry, with a close and heavy fire of cannon, from the direction of Belleville, announced that the engagement had become general on that part of the line.