On the Origin of Species by Means of Natural Selection 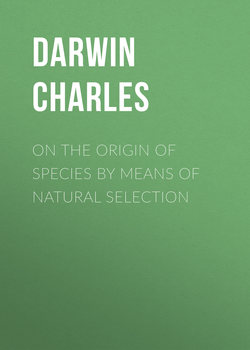 Darwin Charles. On the Origin of Species by Means of Natural Selection

When on board H.M.S. 'Beagle,' as naturalist, I was much struck with certain facts in the distribution of the inhabitants of South America, and in the geological relations of the present to the past inhabitants of that continent. These facts seemed to me to throw some light on the origin of species – that mystery of mysteries, as it has been called by one of our greatest philosophers. On my return home, it occurred to me, in 1837, that something might perhaps be made out on this question by patiently accumulating and reflecting on all sorts of facts which could possibly have any bearing on it. After five years' work I allowed myself to speculate on the subject, and drew up some short notes; these I enlarged in 1844 into a sketch of the conclusions, which then seemed to me probable: from that period to the present day I have steadily pursued the same object. I hope that I may be excused for entering on these personal details, as I give them to show that I have not been hasty in coming to a decision.

My work is now nearly finished; but as it will take me two or three more years to complete it, and as my health is far from strong, I have been urged to publish this Abstract. I have more especially been induced to do this, as Mr. Wallace, who is now studying the natural history of the Malay archipelago, has arrived at almost exactly the same general conclusions that I have on the origin of species. Last year he sent me a memoir on this subject, with a request that I would forward it to Sir Charles Lyell, who sent it to the Linnean Society, and it is published in the third volume of the Journal of that Society. Sir C. Lyell and Dr. Hooker, who both knew of my work – the latter having read my sketch of 1844 – honoured me by thinking it advisable to publish, with Mr. Wallace's excellent memoir, some brief extracts from my manuscripts.

Lastly, the hybrids or mongrels from between all the domestic breeds of pigeons are perfectly fertile. I can state this from my own observations, purposely made, on the most distinct breeds. Now, it is difficult, perhaps impossible, to bring forward one case of the hybrid offspring of two animals clearly distinct being themselves perfectly fertile. Some authors believe that long-continued domestication eliminates this strong tendency to sterility: from the history of the dog I think there is some probability in this hypothesis, if applied to species closely related together, though it is unsupported by a single experiment. But to extend the hypothesis so far as to suppose that species, aboriginally as distinct as carriers, tumblers, pouters, and fantails now are, should yield offspring perfectly fertile, inter se, seems to me rash in the extreme.

From these several reasons, namely, the improbability of man having formerly got seven or eight supposed species of pigeons to breed freely under domestication; these supposed species being quite unknown in a wild state, and their becoming nowhere feral; these species having very abnormal characters in certain respects, as compared with all other Columbidæ, though so like in most other respects to the rock-pigeon; the blue colour and various marks occasionally appearing in all the breeds, both when kept pure and when crossed; the mongrel offspring being perfectly fertile; – from these several reasons, taken together, I can feel no doubt that all our domestic breeds have descended from the Columba livia with its geographical sub-species.