The Origin of Species by Means of Natural Selection 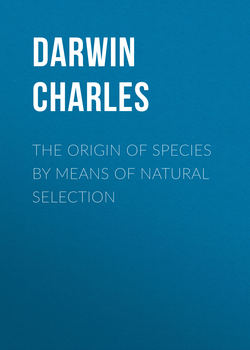 Darwin Charles. The Origin of Species by Means of Natural Selection

AN HISTORICAL SKETCH OF THE PROGRESS OF OPINION ON THE ORIGIN OF SPECIES, PREVIOUSLY TO THE PUBLICATION OF THE FIRST EDITION OF THIS WORK

CHAPTER I. VARIATION UNDER DOMESTICATION

CHAPTER IV. NATURAL SELECTION; OR THE SURVIVAL OF THE FITTEST

CHAPTER VI. DIFFICULTIES OF THE THEORY

CHAPTER VII. MISCELLANEOUS OBJECTIONS TO THE THEORY OF NATURAL SELECTION

CHAPTER X. ON THE IMPERFECTION OF THE GEOLOGICAL RECORD

CHAPTER XI. ON THE GEOLOGICAL SUCCESSION OF ORGANIC BEINGS

GLOSSARY OF THE PRINCIPAL SCIENTIFIC TERMS USED IN THE PRESENT VOLUME

I will here give a brief sketch of the progress of opinion on the Origin of Species. Until recently the great majority of naturalists believed that species were immutable productions, and had been separately created. This view has been ably maintained by many authors. Some few naturalists, on the other hand, have believed that species undergo modification, and that the existing forms of life are the descendants by true generation of pre existing forms. Passing over allusions to the subject in the classical writers (Aristotle, in his "Physicae Auscultationes" (lib.2, cap.8, s.2), after remarking that rain does not fall in order to make the corn grow, any more than it falls to spoil the farmer's corn when threshed out of doors, applies the same argument to organisation; and adds (as translated by Mr. Clair Grece, who first pointed out the passage to me), "So what hinders the different parts (of the body) from having this merely accidental relation in nature? as the teeth, for example, grow by necessity, the front ones sharp, adapted for dividing, and the grinders flat, and serviceable for masticating the food; since they were not made for the sake of this, but it was the result of accident. And in like manner as to other parts in which there appears to exist an adaptation to an end. Wheresoever, therefore, all things together (that is all the parts of one whole) happened like as if they were made for the sake of something, these were preserved, having been appropriately constituted by an internal spontaneity; and whatsoever things were not thus constituted, perished and still perish." We here see the principle of natural selection shadowed forth, but how little Aristotle fully comprehended the principle, is shown by his remarks on the formation of the teeth.), the first author who in modern times has treated it in a scientific spirit was Buffon. But as his opinions fluctuated greatly at different periods, and as he does not enter on the causes or means of the transformation of species, I need not here enter on details.

Lamarck was the first man whose conclusions on the subject excited much attention. This justly celebrated naturalist first published his views in 1801; he much enlarged them in 1809 in his "Philosophie Zoologique", and subsequently, 1815, in the Introduction to his "Hist. Nat. des Animaux sans Vertebres". In these works he up holds the doctrine that all species, including man, are descended from other species. He first did the eminent service of arousing attention to the probability of all change in the organic, as well as in the inorganic world, being the result of law, and not of miraculous interposition. Lamarck seems to have been chiefly led to his conclusion on the gradual change of species, by the difficulty of distinguishing species and varieties, by the almost perfect gradation of forms in certain groups, and by the analogy of domestic productions. With respect to the means of modification, he attributed something to the direct action of the physical conditions of life, something to the crossing of already existing forms, and much to use and disuse, that is, to the effects of habit. To this latter agency he seems to attribute all the beautiful adaptations in nature; such as the long neck of the giraffe for browsing on the branches of trees. But he likewise believed in a law of progressive development, and as all the forms of life thus tend to progress, in order to account for the existence at the present day of simple productions, he maintains that such forms are now spontaneously generated. (I have taken the date of the first publication of Lamarck from Isidore Geoffroy Saint-Hilaire's ("Hist. Nat. Generale", tom. ii. page 405, 1859) excellent history of opinion on this subject. In this work a full account is given of Buffon's conclusions on the same subject. It is curious how largely my grandfather, Dr. Erasmus Darwin, anticipated the views and erroneous grounds of opinion of Lamarck in his "Zoonomia" (vol. i. pages 500-510), published in 1794. According to Isid. Geoffroy there is no doubt that Goethe was an extreme partisan of similar views, as shown in the introduction to a work written in 1794 and 1795, but not published till long afterward; he has pointedly remarked ("Goethe als Naturforscher", von Dr. Karl Meding, s. 34) that the future question for naturalists will be how, for instance, cattle got their horns and not for what they are used. It is rather a singular instance of the manner in which similar views arise at about the same time, that Goethe in Germany, Dr. Darwin in England, and Geoffroy Saint-Hilaire (as we shall immediately see) in France, came to the same conclusion on the origin of species, in the years 1794-5.)

Lastly, the hybrids or mongrels from between all the breeds of the pigeon are perfectly fertile, as I can state from my own observations, purposely made, on the most distinct breeds. Now, hardly any cases have been ascertained with certainty of hybrids from two quite distinct species of animals being perfectly fertile. Some authors believe that long-continued domestication eliminates this strong tendency to sterility in species. From the history of the dog, and of some other domestic animals, this conclusion is probably quite correct, if applied to species closely related to each other. But to extend it so far as to suppose that species, aboriginally as distinct as carriers, tumblers, pouters, and fantails now are, should yield offspring perfectly fertile, inter se, seems to me rash in the extreme.

From these several reasons, namely, the improbability of man having formerly made seven or eight supposed species of pigeons to breed freely under domestication – these supposed species being quite unknown in a wild state, and their not having become anywhere feral – these species presenting certain very abnormal characters, as compared with all other Columbidae, though so like the rock-pigeon in most other respects – the occasional reappearance of the blue colour and various black marks in all the breeds, both when kept pure and when crossed – and lastly, the mongrel offspring being perfectly fertile – from these several reasons, taken together, we may safely conclude that all our domestic breeds are descended from the rock-pigeon or Columba livia with its geographical sub-species.