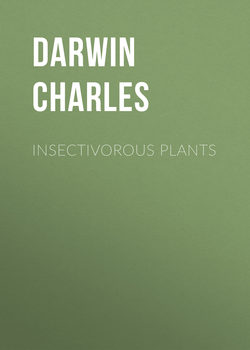 I WILL give in this and the following chapters some of the many experiments made, which best illustrate the manner and rate of movement of the tentacles, when excited in various ways. The glands alone in all ordinary cases are susceptible to excitement. When excited, they do not themselves move or change form, but transmit a motor impulse to the bending part of their own and adjoining tentacles, and are thus carried towards the centre of the leaf. Strictly speaking, the glands ought to be called irritable, as the term sensitive generally implies consciousness; but no one supposes that the Sensitive-plant is conscious, and as I have found the term convenient, I shall use it without scruple. I will commence with the movements of the exterior tentacles, when indirectly excited by stimulants applied to the glands of the short tentacles on the disc. The exterior tentacles may be said in this case to be indirectly excited, because their own glands are not directly acted on. The stimulus proceeding from the glands of the disc acts on the bending part of the exterior tentacles, near their bases, and does not (as will hereafter be proved) first travel up the pedicels to the glands, to be then reflected back to the bending place. Nevertheless, some influence does travel up to the glands, causing them to secrete more copiously, and the secretion to become acid. This latter fact is, I believe, quite new in the physiology of plants; it has indeed only recently been established that in the animal kingdom an influence can be transmitted along the nerves to glands, modifying their power of secretion, independently of the state of the blood-vessels.

The Inflection of the Exterior Tentacles from the Glands of the Disc being excited by Repeated Touches, or by Objects left in Contact with them.

The fact of a single touch or even of two or three touches not causing inflection must be of some service to the plant; as during stormy weather, the glands cannot fail to be occasionally touched by the tall blades of grass, or by other plants growing near; and it would be a great evil if the tentacles were thus brought into action, for the act of re-expansion takes a considerable time, and until the tentacles are re-expanded they cannot catch prey. On the other hand, extreme sensitiveness to slight pressure is of the highest service to the plant; for, as we have seen, if the delicate feet of a minute struggling insect press ever so lightly on the surfaces of two or three glands, the tentacles bearing these glands soon curl inwards and carry the insect with them to the centre, causing, after a time, all the circumferential tentacles to embrace it. Nevertheless, the movements of the plant are not perfectly adapted to its requirements; for if a bit of dry moss, peat, or other rubbish, is blown on to the disc, as often happens, the tentacles clasp it in a useless manner. They soon, however, discover their mistake and release such innutritious objects.

It is also a remarkable fact, that drops of water falling from a height, whether under the form of natural or artificial rain, do not cause the tentacles to move; yet the drops must strike the glands with considerable force, more especially after the secretion has been all washed away by heavy rain; and this often occurs, though the secretion is so viscid that it can be removed with difficulty merely by waving the leaves in water. If the falling drops of water are small, they adhere to the secretion, the weight of which must be increased in a much greater degree, as before remarked, than by the addition of minute particles of solid matter; yet the drops never cause the tentacles to become inflected. It would obviously have been a great evil to the plant (as in the case of occasional touches) if the tentacles were excited to bend by every shower of rain; but this evil has been avoided by the glands either having become through habit insensible to the blows and prolonged pressure of drops of water, or to their having been originally rendered sensitive solely to the contact of solid bodies. We shall hereafter see that the filaments on the leaves of Dionaea are likewise insensible to the impact of fluids, though exquisitely sensitive to momentary touches from any solid body.