The History of the Remarkable Life of John Sheppard 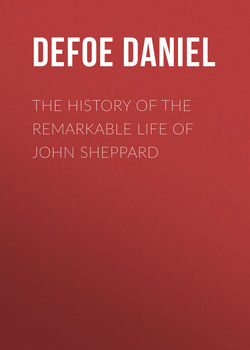 Defoe Daniel. The History of the Remarkable Life of John Sheppard

TO THE CITIZENS OF London and Westminster

THE LIFE OF JOHN SHEPPARD, &c

Experience has confirm'd you in that everlasting Maxim, that there is no other way to protect the Innocent, but by Punishing the Guilty.

Crimes ever were, and ever must be unavoidably frequent in such populous Cities as yours are, being the necessary Consequences, either of the Wants, or the Depravity, of the lowest part of the humane Species.

Through the just and salutary Severities of the Magistrates, publick excessive Gaming has been in a manner Surpress'd; and some late Examples of divine Vengeance have overtaken certain of the most notorious lewd Prostitutes of the Town, which together with the laudable endeavours of the great and worthy Societies, has given no small check to that enormous and spreading Vice.

But here's a Criminal bids Defiance to your Laws, and Justice who declar'd and has manifested that the Bars are not made that can either keep him Out, or keep him In, and accordingly hath a second time fled from the very Bosom Of Death.