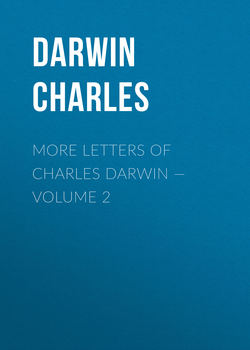 Prof. Miquel, of Utrecht, begs me to ask you for your carte, and offers his in return. I grieve to bother you on such a subject. I am sick and tired of this carte correspondence. I cannot conceive what Humboldt's Pyrenean violet is: no such is mentioned in Webb, and no alpine one at all. I am sorry I forgot to mention the stronger African affinity of the eastern Canary Islands. Thank you for mentioning it. I cannot admit, without further analysis, that most of the peculiar Atlantic Islands genera were derived from Europe, and have since become extinct there. I have rather thought that many are only altered forms of existing European genera; but this is a very difficult point, and would require a careful study of such genera and allies with this object in view. The subject has often presented itself to me as a grand one for analytic botany. No doubt its establishment would account for the community of the peculiar genera on the several groups and islets, but whilst so many species are common we must allow for a good deal of migration of peculiar genera too.

However, I will try to do something to mend this matter, should I have to prepare another edition.

I return you Forel's letter. It does not advance the question much; neither do I think it likely that even the complete observation he thinks necessary would be of much use, because it may well be that the ova, or larvae, or imagos of the beetles are not carried systematically by the ants, but only occasionally, owing to some exceptional circumstances. This might produce a great effect in distribution, yet be so rare as never to come under observation.