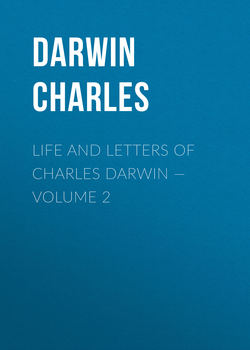 CHAPTER 2.I. — THE PUBLICATION OF THE 'ORIGIN OF SPECIES.'

CHAPTER 2.IV. — THE SPREAD OF EVOLUTION

CHAPTER 2.V. — THE PUBLICATION OF THE 'VARIATION OF ANIMALS AND PLANTS UNDER DOMESTICATION.'

CHAPTER 2.VII. — PUBLICATION OF THE 'DESCENT OF MAN.'

CHAPTER 2.XI. — THE 'EFFECTS OF CROSS- AND SELF-FERTILISATION

CHAPTER 2.XII. — 'DIFFERENT FORMS OF FLOWERS ON PLANTS OF THE SAME SPECIES.'

CHAPTER 2.XIV. — THE 'POWER OF MOVEMENT IN PLANTS.'

Notes on the Effects produced by the Ancient Glaciers of

Notes on the Fertilization of Orchids. Annals and Magazine of Natural

[Under the date of October 1st, 1859, in my father's Diary occurs the entry: "Finished proofs (thirteen months and ten days) of Abstract on 'Origin of Species'; 1250 copies printed. The first edition was published on November 24th, and all copies sold first day."

On October 2d he started for a water-cure establishment at Ilkley, near Leeds, where he remained with his family until December, and on the 9th of that month he was again at Down. The only other entry in the Diary for this year is as follows: "During end of November and beginning of December, employed in correcting for second edition of 3000 copies; multitude of letters."

... I had a letter from [Huxley] with such tremendous praise of my book, that modesty (as I am trying to cultivate that difficult herb) prevents me sending it to you, which I should have liked to have done, as he is very modest about himself.

You have cockered me up to that extent, that I now feel I can face a score of savage reviewers. I suppose you are still with the Lyells. Give my kindest remembrance to them. I triumph to hear that he continues to approve.