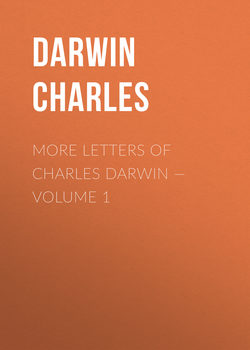 CHAPTER 1.I. — AN AUTOBIOGRAPHICAL FRAGMENT, AND EARLY LETTERS

The "Life and Letters of Charles Darwin" was published in 1887. Since that date, through the kindness of various correspondents, additional letters have been received; among them may be mentioned those written by Mr. Darwin to Mr. Belt, Lady Derby, Hugh Falconer, Mr. Francis Galton, Huxley, Lyell, Mr. John Morley, Max Muller, Owen, Lord Playfair, John Scott, Thwaites, Sir William Turner, John Jenner Weir. But the material for our work consisted in chief part of a mass of letters which, for want of space or for other reasons, were not printed in the "Life and Letters." We would draw particular attention to the correspondence with Sir Joseph Hooker. To him Mr. Darwin wrote with complete freedom, and this has given something of a personal charm to the most technical of his letters. There is also much correspondence, hardly inferior in biographical interest, with Sir Charles Lyell, Fritz Muller, Mr. Huxley, and Mr. Wallace. From this unused material we have been able to compile an almost complete record of Mr. Darwin's work in a series of letters now published for the first time. We have, however, in a few instances, repeated paragraphs, or in one or two cases whole letters, from the "Life and Letters," where such repetition seemed necessary for the sake of clearness or continuity.

Our two volumes contain practically all the matter that it now seems desirable to publish. But at some future time others may find interesting data in what remains unprinted; this is certainly true of a short series of letters dealing with the Cirripedes, which are omitted solely for want of space. (Preface/1. Those addressed to the late Albany Hancock have already appeared in the "Transactions of the Tyneside Nat. Field Club," VIII., page 250.)

I have again to thank you cordially for your letter. Your remarks shall fructify to some extent, and I will try to be more faithful to rigid virtue and priority; but as for calling Balanus "Lepas" (which I did not think of) I cannot do it, my pen won't write it — it is impossible. I have great hopes some of my difficulties will disappear, owing to wrong dates in Agassiz and to my having to run several genera into one; for I have as yet gone, in but few cases, to original sources. With respect to adopting my own notions in my Cirripedia book, I should not like to do so without I found others approved, and in some public way; nor indeed is it well adapted, as I can never recognise a species without I have the original specimen, which fortunately I have in many cases in the British Museum. Thus far I mean to adopt my notion, in never putting mihi or Darwin after my own species, and in the anatomical text giving no authors' names at all, as the systematic part will serve for those who want to know the history of the species as far as I can imperfectly work it out.

I have had a note from W. Thompson (30/2. Mr. Thompson is described in the preface to the Lepadidae as "the distinguished Natural Historian of Ireland.") this morning, and he tells me Ogleby has some scheme identical almost with mine. I feel pretty sure there is a growing general aversion to the appendage of author's name, except in cases where necessary. Now at this moment I have seen specimens ticketed with a specific name and no reference — such are hopelessly inconvenient; but I declare I would rather (as saving time) have a reference to some second systematic work than to the original author, for I have cases of this which hardly help me at all, for I know not where to look amongst endless periodical foreign papers. On the other hand, one can get hold of most systematic works and so follow up the scent, and a species does not long lie buried exclusively in a paper.