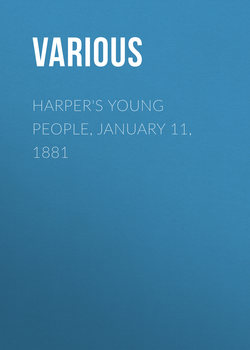 THE MESSENGER BOYS AT THE CAPITOL

A HERO OF CHIVALRY

TOBY TYLER; OR, TEN WEEKS WITH A CIRCUS

WILD BIRDS IN THE COUNTRY

A lad who visits the city of Washington for the first time, and looks down from the galleries of the House of Representatives or of the Senate on the busy scene below, will be sure to find his eye attracted by groups of bright-looking and neatly dressed boys moving hither and thither about the floor, speaking familiarly with this and that great man, or amusing themselves on the steps of the Vice-President's or of the Speaker's platform, and he will perhaps regard these boys with something like envy – all the more when told that they receive about two dollars and seventy-five cents a day, during the sessions of Congress, to pay them for having such a good time.

Possibly our lad would not regard the picture as so pleasant if he knew how burdensome are the duties of these boys, and how exceedingly well they earn the money paid them. There are nearly thirty of them attached to the House, and half as many to the Senate. Their ages run from nine years upward, some numbering twice as many summers; and it is not by any means the oldest who are the brightest and the most favored. They are of respectable families; some of them are nephews of Members of Congress – a Member once, indeed, had such questionable taste as to procure the appointment of his own son; and some of them have been known in after-years to become Members themselves. The recently chosen Senator from Maryland is doubtless proud to remember that he himself was once a page. Although in two or three instances these boys have been elected to their places, instead of appointed, they are usually appointed by the Sergeant-at-Arms – of course on the recommendation and through the influence of the Congressmen – and they are under his control. The old custom of appointing only orphan boys is no longer adhered to. The boy who fell over the balustrade, and was made a page by special resolution of the Senate, is a very exceptional case – probably his favorite song thereafter was, "Such a getting up stairs I ne'er did see."

Many of these youths are appointed because there is some great need in their families, or have been some pitiable circumstances in their history. This curly-headed little fellow is the only support of a mother and younger brothers and sisters; there is one who takes care of a paralyzed father, the only relative he has in the world, going home, after his hard work, to make life as pleasant as he can for him who can never do any more work; here is another whose little house is kept for him by a child-sister, who looks for his step at night with solicitude. Most of them have somebody besides themselves to take a share of their earnings.

Beyond their regular pay, there are various perquisites and fees which swell their income considerably. Thus they may often be seen slipping an open book, with a bit of blotting-paper, under the nose of some Member who is sitting at his desk: it is an album for somebody who wants the signatures of all these statesmen, which the statesmen kindly give, but which nevertheless are not always easy to obtain, owing to the difficulty of finding individuals in their seats, as all of the Congressmen are by no means in constant attendance, many of them being busy in committee-rooms, or lounging in cloak-rooms, or lunching, or following the bent of their inclinations in other ways, and seldom coming in after roll-call, save to hear a heralded speech, or to vote on measures with which they are already familiar either from the reading of the daily journal of proceedings, or in the committee-room, or by the word of mouth of others. For every album that they thus fill with signatures the boys receive ten dollars from the eager visitor of the Capitol, and they fill a good many during the year.