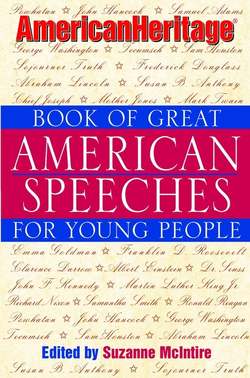 The history of the United States has been characterized by fervent idealism, intense struggle, and radical change. And for every critical, defining moment in American history, there were those whose impassioned voices rang out, clear and true, and whose words compelled the minds and hearts of all who heard them. When Patrick Henry declared, «Give me liberty, or give me death!», when Martin Luther King Jr. said, «I have a dream», Americans listened and were profoundly affected. These speeches stand today as testaments to this great nation made up of individuals with bold ideas and unshakeable convictions. The American Heritage Book of Great American Speeches for Young People includes over 100 speeches by founding fathers, patriots, Native American and African American leaders, abolitionists, women's suffrage and labor activists, writers, athletes, and others from all walks of life, featuring inspiring and unforgettable speeches by such notable speakers as: Patrick Henry * Thomas Jefferson * Tecumseh * Frederick Douglass * Sojourner Truth * Abraham Lincoln * Susan B. Anthony * Mother Jones * Lou Gehrig * Franklin D. Roosevelt * Albert Einstein * Pearl S. Buck * Langston Hughes * John F. Kennedy * Martin Luther King Jr. These are the voices that shaped our history. They are powerful, moving, and, above all else, uniquely American.
Добавить отзыв